The Story of Tewkesbury Medieval Festival

Tewkesbury is a town that even when you first arrive is obviously one with a lot of history. The old buildings and the many local tales are part of the appeal, but it is a town that blends easily the historic with the modern – it is home to many modern companies like this Tewkesbury business coach www.randall-payne.co.uk/services/business-advisory/business-coaching

Tewkesbury really celebrates its history, and for one weekend a year, Tewkesbury Medieval Festival attracts many people from all around the world to the small town – here is how it started…

The battle of Tewkesbury in 1471 put Tewkesbury firmly in the history books as the battle waged in fields surrounding the town and the house of York were victorious over the Lancastrians. This battle is something that many people come to see re-enacted each year at the Tewkesbury medieval festival which is held in July. The people who reenact this really make it something to enjoy, as they also set up the camps as they would have been and eat, as well as preparing their armour for battle in the traditional ways that were used at the time. The re-enactors come from all over the world to take part in this huge gathering.

This is something that was started relatively recently – in fact although the battle was waged centuries ago, it wasn’t until the mid 1980s that a local group with an interest in the history of the area started to get ideas to re-enact this battle every year. As well as the battle itself, they also spent the whole weekend living as if they were in those times, camping out and eating the foods of the day. 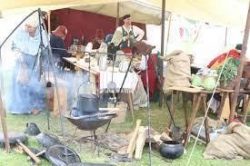 What started as a fairly small group, quickly grew in popularity and people from all over the UK as well as other countries started to hear of this group and joined in every year – nowadays many thousands come to Tewkesbury to take part in this re-enactment each year.

This grew into a larger event that we now know as Tewkesbury medieval festival, and for that one weekend in July, huge swathes of people descend on the town to enjoy watching, as well as taking part in the battle.

As well as being able to watch all of the battlefield action being played out, visitors are also able to wander around the large medieval market. Here you can buy traditional medieval items, as well as feasting on food and drink of the time – bottles of mead are always a popular way to refresh yourself in the July sunshine!

Another great place to visit at the festival is the exhibition tent – here you will be able to see many interesting exhibits put together by museums and historical groups, as well as art and information about the history of the town and the battle. There are other tents too, which cater to children wanting to get involved in the medieval themes, such as arts and craft sessions as well as many medieval entertainments. Something that will of course please many of the adults that is also well worth a visit is the beer tent!